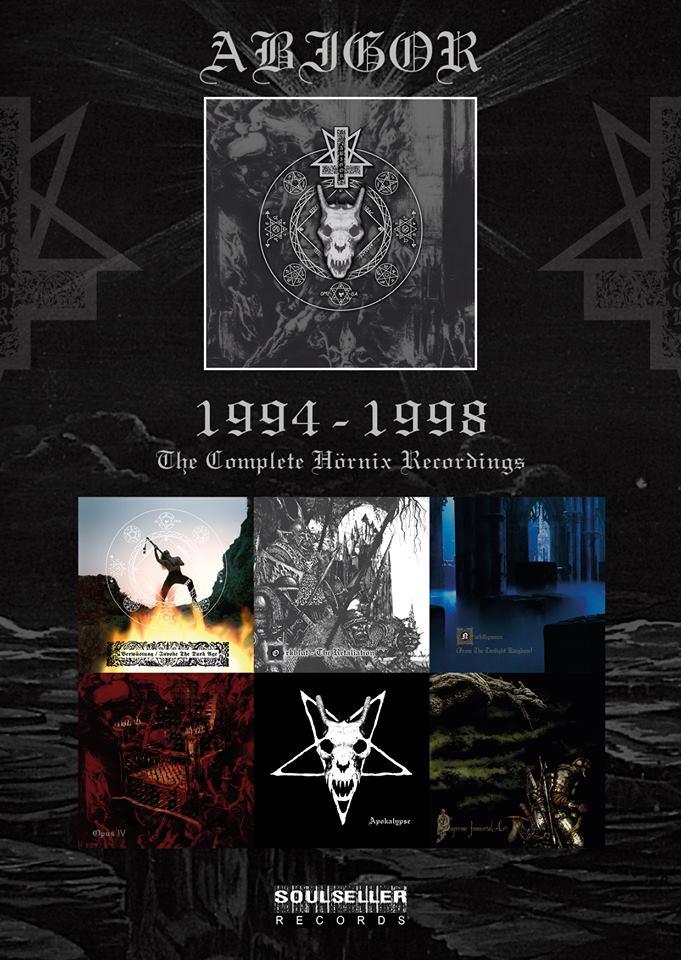 LP 3:
Nachthymnen (From The Twilight Kingdom)

“We want a fully CLASSIC release, and that´s original layout, black vinyl, standard inner sleeves (but of course thick booklet in high paper & print quality).
the thought always was: exactly how these recordings were conceived in the 90s and now finally manifest in original form. we have made all decisions 100% how we would have done it in the 90s. even down to no fancy black coated inner sleeves, but just like all old LPs like the Burzum, Emperor, Zyklon B, or then early End All Life & Northern Heritage LPs continued in the early 00s. down to every detail like typeset. this box will look and sound like a 90s Abigor release down to every detail. it actually is.” – TT/Abigor

(Written by the band) :
After over a year of negotiation and preparation, we can finally announce a vinyl box – presented in a form we have desired for a long time:
all the ´classic´ 90s recordings at Hörnix will be released as 6 LP set.
First of all, apologies to the loyal supporters who bought the various LP versions released between 2005 (Verwüstung) and 2011 (Opus IV). But ever since, we wanted to present something in original artwork and best possible quality.
This hasn´t been possible due to the original layout films all being lost (at first). So we initially chose to do something ´based on the original works´. We were approached by several labels to (re)print the old recordings again, who suggested to create artworks from the CD scans or the like – but we took the emergency brake, this would have been unacceptable. And in october 2013, we could persuade Soulseller Records, who bought the licenses from Napalm, not to do individual releases but rather a 6 LP box, and let Abigor care for the artwork.
At first we only had very few images and therefore, like on the already released LPs, again wanted to create something based on the original designs but ´brought into the new millennium´. But over the months, more and more bits appeard – PK found original cut-out images from magazines we used back then for lyric backgrounds, TT found more old photos, Silenius had more books with the source image used for original covers and booklets, and in the end, with the help of 2 old comrades contributing more missing images, we magically had all pieces to reconstruct the very original artworks, with the same source material as for the CDs in the 90s. Due to the huge research work of Mr. Ben Zodiazepin, we also could finally use each and every original font used in the old CD booklets.
And although one or another photo may be missing, we used others from the same sessions and even additional material from the respective times that resurfaced.
2 decades after their initial manifestations, enthusiastically we will soon be presenting you a 6 LP box with the original visual and sonic material of:

Released by Soulseller Records on black vinyl, with extensive booklet and detailed liner notes, giving insight to the formation of Abigor, the individual recording sessions, the lyrical influences and atmosphere of the times right through to the split of the ´classic´ line-up in 1998, in best visual and sonic quality exclusively.